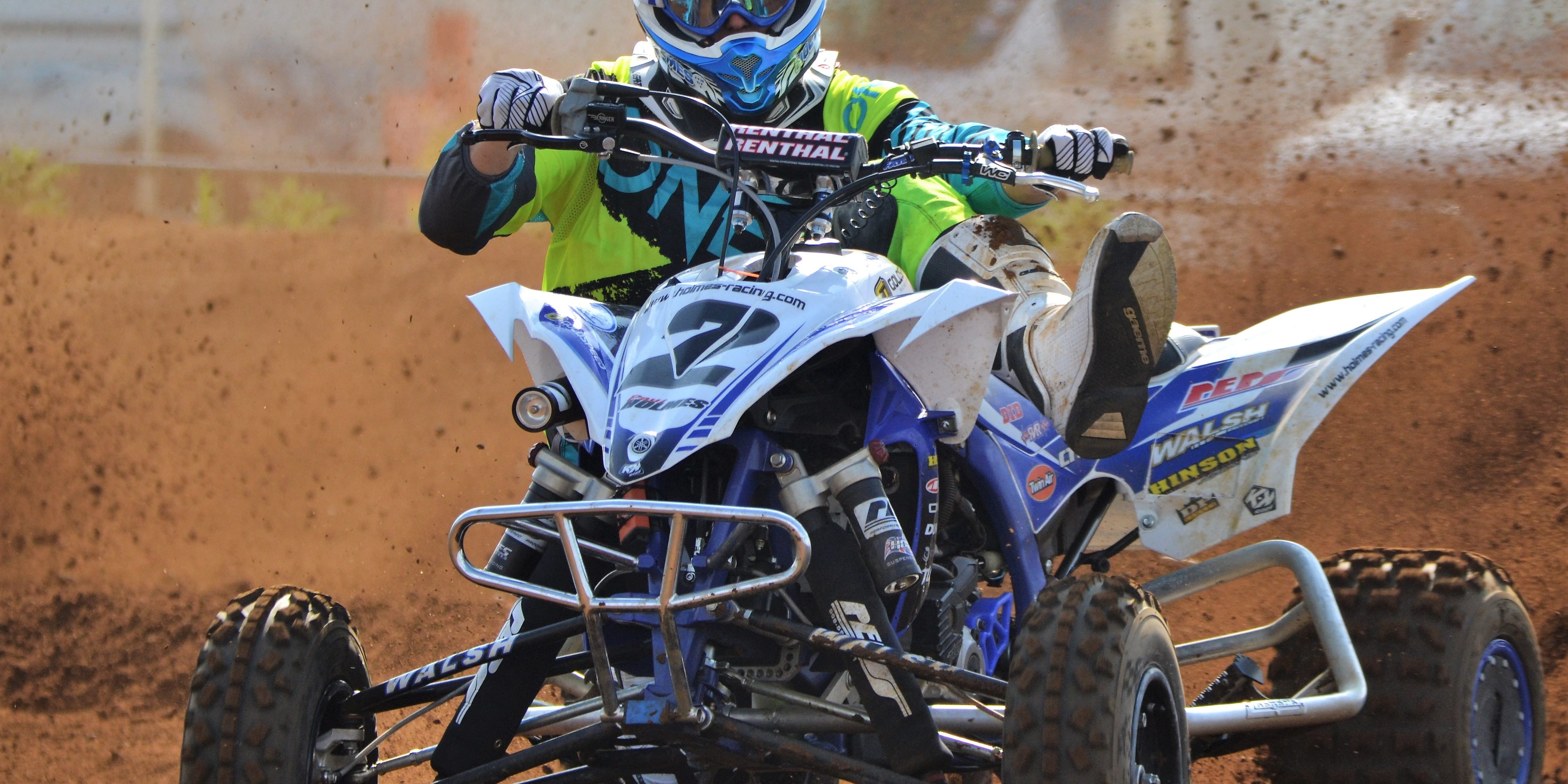 Race 1  – Despite his 3rd place qualifying result, Holmes suffered wheel spin at the start of the first race due to the dry and dusty track conditions, and struggled to round the first corner way down in 10th place. The track was fast in the first race, making overtaking very difficult. Despite this, Holmes manage to minimise the damage of the unfortunate start by clawing his way back up to finish the race in 4th position, riding in free air a good second or so a lap faster than even the front runner.

Race 2 – The event organisers sent out the water bowser before the start of race 2, so conditions improved in Holmes’s favour as the track began to cut up. A good jump out of the gate wasn’t enough, as Holmes tangled with two riders, being shoved by one and then another, to get shuffled back to 9th place around the first corner. Holmes wasn’t going to give up, as ever squeezing every second out of every lap, he began to push towards the front. He managed to overtake all the way up to  2nd place with two laps to go, it looked as if he could take the lead. Unfortunately disaster struck in the form of a puncture, ripping apart the side wall of his tire, so Holmes was forced to limp the bike home for the next two laps to secure 2nd place.

Race 3 – Not phased by his previous two starts, Holmes was resolute to gain as many points as possible and powered his way to the front to round the first corner in the top five. It wasn’t long before the multiple Championship winning rider was able to overtake every ride in front of him, made up of some of the best quad riders the UK has to offer, and quickly secured first place. The rough track saw Holmes leagues ahead of the other riders, and he began pulling a lead at an impressive rate of about 2.6 seconds a lap. He brought home the race win, leaving a staggering gap back to 2nd place of over 33 seconds by the time they crossed the chequered flag.

Summary – Holmes left the day on a positive note. Race results of 4th, 2nd, then 1st (2nd overall on the day) were enough to minimise the damage caused by two bad starts and the bad luck of a puncture during race 2. His lap-by-lap pace could not be matched by any of the other riders. 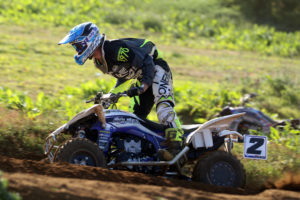 Race 1 – Despite the organiser’s best efforts, the thoroughly prepped track was subject to a bizarre amount of rainfall during the week prior to the race, leaving the track with a layer of mud about 12 inches deep on the surface. This caused a challenge for all the riders, creating a single line around the circuit, from which deviation was perilous. Holmes, who qualified in 1st place by over 1.5 seconds, found out just how dangerous this could be as he rounded the first corner in the top five and drifted wide, the wheels on one side of his bike sunk into the soft ground and almost tipped completely off. The multiple champ kept his cool, sticking to the outside of the course, but unfortunately ended up down in 10th place by the time those on the clean side of the circuit had passed. Despite the one line nature of the circuit, Holmes had to make some outstanding passes managing to complete the race in a hard earned 3rd place.

Race 2 – Another tough start, meant Holmes was once more stuck at the wrong end of the top ten riders. The track’s single line had become faster with more grip meaning even less advantage could be found by moving off line to overtake. Despite riding hard all race, overtaking on a track that was evolving the wrong way for such, Holmes could only manage to achieve finishing in 4th place, with the early race leaders too far ahead to catch in the remaining laps.

Race 3 – A close call, where Holmes was forced to make a last-minute fix to his rear brakes on the start line, left him full of adrenaline before the race even started. His start was immense and he rocketed up the start straight, and managed to be in the top 4 on his way around the first corner. Trying to make up ground for the previous race result, Holmes pushed on to get himself quickly into second place. Showing a staggering pace as the track cut up, he began to hunt down the leader. Unfortunately, despite multiple relentless attacks, Holmes had to settle for second place, deciding that the unpredictable and fast track had taken out enough people in the day to risk losing large amount of points in the championship. He came back in 2nd place, less than half a second behind the leader.

Summary – A consistent ride, and a knack of minimising points damage, even in the face of adversity and bad starts, allowed Holmes to walk away from the 3rd round of the 2017 British Championship two points in the lead. The race results at the end were 3rd, 4th, and 2nd respectively showing that you don’t need to win every battle to win the war; you just need to be consistent.