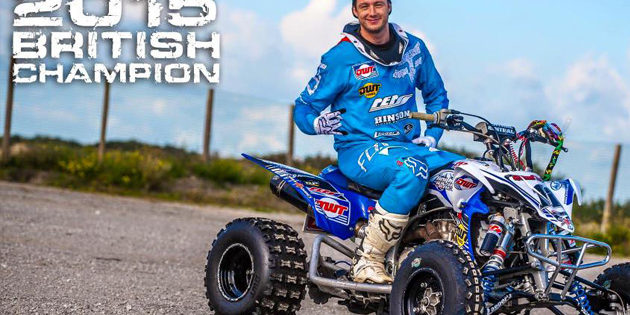 Paul Holmes secured his 3rd British Quad Championship title this past weekend at the final round of the 2015 Willcock Holeformers British Quad Championship at Canada Heights, Kent. This title comes after a 2014 season filled with bad luck and injuries and proves that Holmes is now back on top form. This is his 3rd British Championship victory in the past 4 years and shows he is a tough man to beat on board his HOLMES Racing DWT, PEP suspension ATV.
Entering the final round of this years championship, Holmes had a respectable lead of 54 points and with 150 points available over the day’s 3 races, it was not the time to be complacent.

Race 1: Entering the first turn in around 12th place, Holmes rode smart and stayed out of trouble on the first lap, displaying some experienced overtaking to end lap one in 5th place. Holmes worked his way to 3rd through the race and rode smart until the finish to secure solid points.
Race 2: Getting a better start, up in the top 5 through the first few turns, Holmes made some intelligent line choices and found himself leading the race by the end of lap 1 and began to gap the field. Knowing he could wrap up the championship in this race, as he only needed to finish ahead of his closest championship rival who was further back down the field, Holmes began to ease off the pace towards the end of the race. Coming up short on a fast uphill jump, Holmes and his quad parted company. Holmes was thrown over the bars as the quad went into an end over end roll! Quickly getting to his feet, Holmes re-started his quad and despite the steering stem, bars and lever all bent out of place, Holmes regained his composure and headed back up the race track and quickly made up for lost time. Holmes eventually battled to the finish line in 2nd place and secured enough points to win the championship.
Race 3: Starting the race on his spare quad, Holmes got a brilliant start, seemingly riding better knowing the championship was in the bag and there was no pressure. Holmes dominated the race and took the win, crossing the line a huge 24 seconds ahead of 2nd place.

With this years British Championship attracting 66 riders to its UK based championship, including riders from France, Holland, Sweden, Italy and Lithuania, it is the best supported series in Europe!

Holmes commented after the day’s action: “I can’t believe how much a relief it is to finally wrap up the Championship. It’s been 11 weeks since the previous round and I have been doing a lot of work to prepare for this final and it is satisfying to know I had the pace and consistency to not only take the overall win but secure the Championship! I had a crash in the closing stages of race 2 which caught me by surprise, but it all worked out ok. The team has done a great job all year, and it is thanks to them and all my sponsors and supporters this is all possible so I must say a huge thank you to all of them and of course my family and friends. I look forward now to some winter training and come back stronger for 2016!”