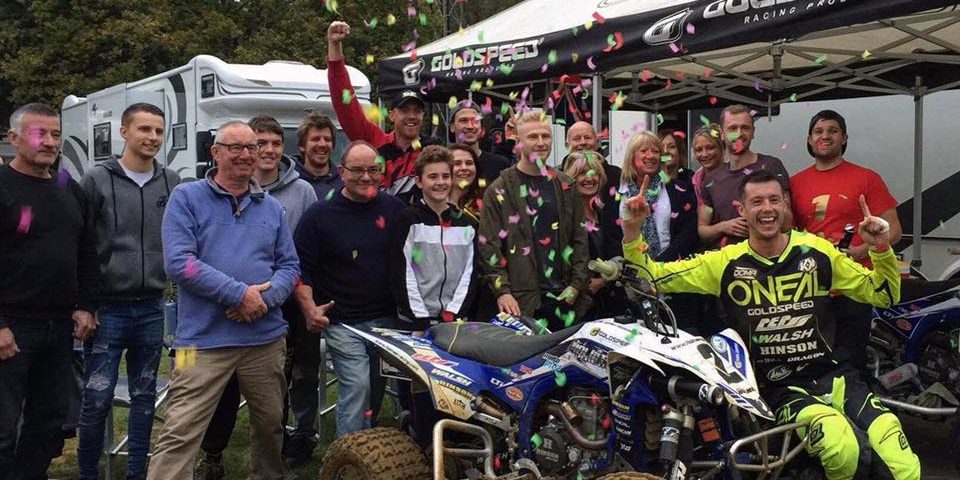 Just 11 days after his biggest fan and father passed away, Paul Holmes headed into the British Championship final with immense amounts of emotion on his side and a 1 point deficit in the series standings. In dominating form, Holmes grabbed his 4th overall victory of the year, in the process, clinched his 4th ACU British Quad-X Championship in just 6 years!

8th October 2017 – The final round of this year’s Championship was held at the sandy and very demanding circuit of Canada Heights. Timed Qualification saw Holmes go immediately to the top of the standings after his one and only fast lap attempt, knowing it was a great lap he opted to reserve his energy and didn’t go back out on the track, eventually his time was 0.771 seconds clear of 2nd place, Leon Rogers. This gave Holmes 1st gate choice from the 30 rider line up for the three 20 minute + 2 lap races.

Race 1: A top 5 start set Holmes up nicely for a good race, who was in 4th by the end of lap 1. Despite a small coming together with his championship rival, McLernon, Holmes kept his cool and finished 2nd place behind early race leader Rogers and bagged a huge points haul over his rival.

Race 2: Another good start, rounding turn 1 in 3rd place Holmes soon moved into 2nd place and was setting his sights on the lead. On lap 3 Holmes made the pass for the lead and didn’t look back, taking an impressive victory and with it, the Championship!

Race 3: With the Championship already sealed and the pressure off, Holmes wanted to end the year in style and got another good start and by the end of lap 2 was already in the lead and gapping the rest of the field comfortably. With continuous fastest laps of the race, Holmes then managed the gap ahead of 2nd place, Carl Bunce, keeping a safe distance before taking the chequered flag.

Holmes commented at the end of the day’s racing “I am overwhelmed at the support I’ve had since the passing of my father, and I would like to dedicate this and all my other Championship victories to him. He was my best friend and my biggest fan. I knew what I had to do ahead of today’s racing and a 2-1-1 result, It couldn’t have gone much better! I would like to say a huge thank you to all my very supportive sponsors and team who’ve helped make all this a possibility”