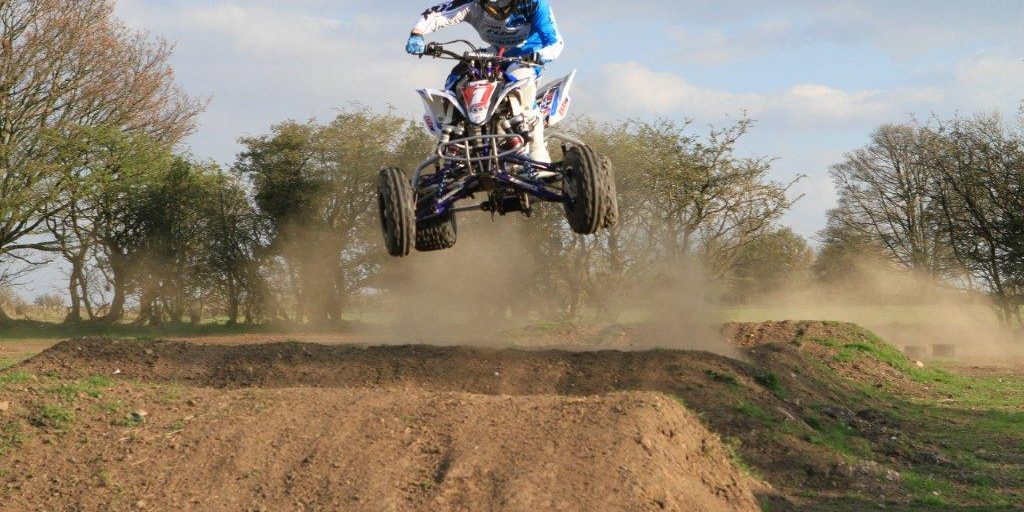 Fresh from winning the opening round of the MCF ATV’s Only British Nationals at Culham park, Paul Holmes headed to Round 1 of the ACU British Champion as the reigning Champion and showed total dominance winning both races in style.

Frome, Somerset, ENGLAND (6th May 2013)
Ideal weather conditions greeted the competitors and race fans at the traditional hill side wooded venue of Frome. The hard pack based circuit was in prime condition ready for the day’s action which started with the timed qualification session. Holmes came out strong and posted a lap time 0.9 seconds faster than 2nd placed David Cowan giving him 1st choice of the starting gate for the two 25 minute + 2 lap races.
Race 1: After a last minute switch to his spare quad due to a technical issue, Holmes leaped out of the starting gate and rounded the first corner in 3rd place. He managed to find passing opportunities on the technical and tight circuit and after a mid race battle with Lindsey Duke, Holmes took the lead and the win, bagging the fastest lap of the race in the process.
Race 2: Getting another good start, Holmes came around the first corner in 4th place which he didn’t settle for as he started his charge to the front. Passing riders as soon as possible to avoid any unnecessary roost, Holmes was leading the race by mid race distance and pulled a comfortable lead. He rode smart up to the chequered flag claiming another race win and another fastest lap of the race showing clear dominance throughout the day.
Taking a perfect 1-1 score and a maximum 50 points, Holmes starts this Championship were he left off in 2012, leading the Championship by 6 points.

Holmes commented after the day’s action: “I couldn’t have wished for a better start to the year than this! Today has been great and leading both National Championships is huge for both me and the team. I need to thank my parents, girlfriend and amazingly supportive sponsors who have helped me get to this point. I will try and roll this momentum into the next race and hope to keep hold of the red plate!”