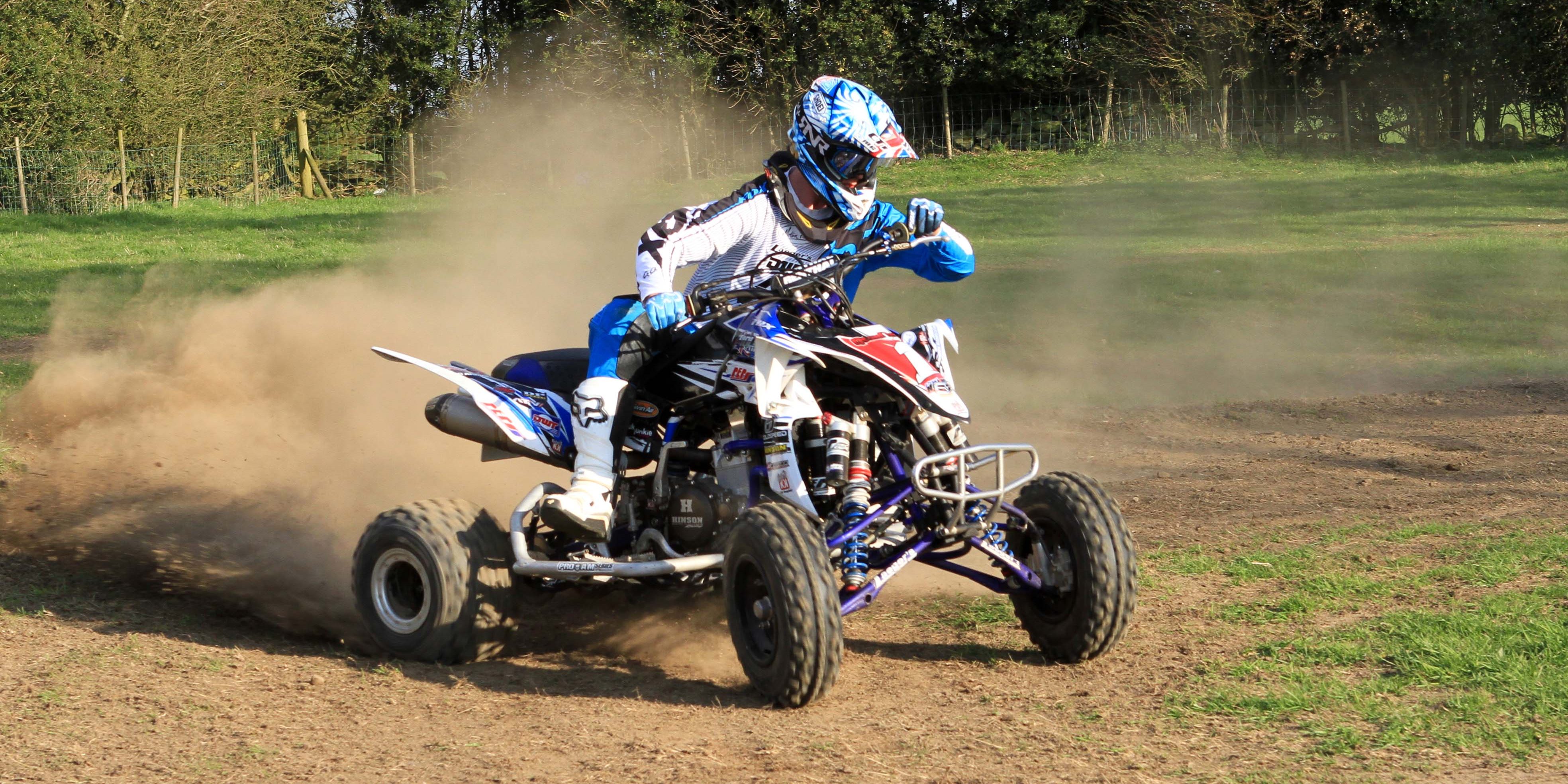 Round 2 of the MCF ATVs Only National Championship was held this past weekend at the legendary Landrake moto park, situated just 2 miles into Cornwall. The fast and flowing hard pack based circuit, packed with big jumps and technical whoops sections, had taken a lot of water in the week leading up to the race but as Sunday’s action began the track was in great condition.
Landrake Moto Park, Cornwall, ENGLAND (12th May 2013)
Drizzling rain and showers throughout the day meant riding conditions were difficult and slowed the pace slightly closing the pack up in the timed qualification. But, once again, it was Paul Holmes who rose to the top and posted a lap time un-matched by any other rider, 1.9 seconds ahead of 2nd placed Reid. This lap time gave him the 1st choice for the starting gates headed into the three 20 minute plus 2 lap races.
Race 1: Sticky conditions coming out of the gate meant Holmes didn’t get an ideal start and was mid pack headed up the starting hill. Down in 17th place after the first turn and weather conditions less than ideal, Holmes pushed passed the opposition and carved his way through the busy pack of riders to finish up in 2nd place by the end of the race showing brilliant skill and determination.
Race 2: After being cut up off the start, Holmes was again left mid pack on the opening lap and down in 11th place by the end of lap 1. With weather conditions getting worse throughout the race and Holmes unfortunately losing the use of his front brakes, he battled through the field but had to settle for 5th place by the end of the race.
Race 3: Wanting to put his disappointing race 2 behind him, Holmes stormed out of the gate and rounded the first corner in 3rd place. Holmes knew he didn’t need to rush to the front so he made the passes for the lead where and when he wanted. Holmes set the fastest lap of the race and proceeded to gap the chasing field until the chequered flag taking a well deserved race victory.
The 2-5-1 scorecard gave Holmes 2nd overall on the day, just missing out on another overall victory. Holmes has now extended his points lead in the overall Championship to 17 points headed into round 3.

Holmes commented after the day’s action: “Today has been difficult. I had to battle against the weather and track conditions but I worked as hard as I could and am still happy with 2nd overall. Extending the points lead in the Championship is great and a real high note to leave on headed into this short break. I will take some time to recover as I picked up a shoulder injury last weekend which has hindered me a bit today and we have a few improvements to make with the quad but I cannot complain at our great start to the year. Another huge shout out needs to go to the Holmes Racing Team and the guys at PEP Suspension who helped me through the tricky track conditions today. The shocks were working awesome and the last race showed how we improved things throughout the day.”