Paul Holmes rides through injury for 2nd place at the opener! 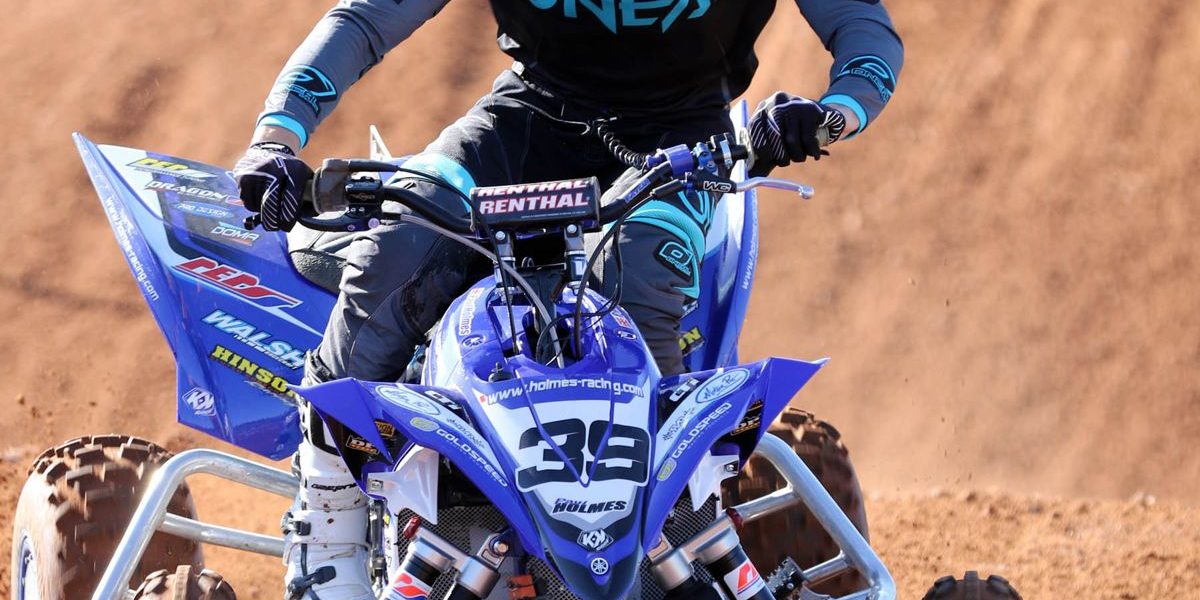 Reigning 4 x National Champion, Paul Holmes headed to Round 1 of the 2018 British Championship full of confidence following a strong off-season training schedule including a pre-season race win in California in early March. Choosing to run the number 39, which was his late fathers racing number, on his ‘Holmes Racing’ PEP/Walsh Yamaha, Holmes placed 2nd overall in what he called ‘a rollercoaster of a day’.

Holmes started the day well with a blistering lap time in the timed Qualification; a full second quicker than 2nd placed local rider and last years number 3, Leon Rogers. Later in the session, Holmes took a heavy hit to the ground after a small error in one of the faster, softer sections of the track, leaving him and his quad a bit battered and bruised following the high side incident. That wasn’t enough to stop a determined Holmes and he was still awarded the first gate pick for the three 20 minute + 2 lap races.

Race 1: Coming around the first corner in the top 5, Holmes kept it smart and he settled into the race by finding his own lines and skillfully worked his way up to 2nd place by the chequered flag.

Race 2: A less impressive start saw Holmes outside of the top 10 in the first lap but his quick thinking
and equally quick race craft picked up a few places early on. With the track becoming very ‘1 line’ it
became harder to pick through the pack without getting too close to the riders ahead and filling in
the radiator. With his machine beginning to overheat towards the last third of the race, Holmes
settled for his 4th place knowing it was still solid points towards his 2018 campaign.

Race 3: Getting a better start and coming away from turn 1 in 3rd place, Holmes put his new lines to
the test from the sighting lap and soon found himself pushing his way to the front of the pack,
moving clear of the field and then managing his lead until the flag taking a statement win.

A 2-4-1 scorecard was enough to give Holmes an impressive 2nd place overall on the day.

Holmes commented at the end of the day’s racing: “Despite the knock to the head and my ribs in
Qualification, I am pretty happy with how today has gone. The quads ran great and I’m really happy
with the set-up I am running. I need to thank my family, girlfriend, friends and team who all pulled
together this weekend and through the winter to get us ready for Round 1 and set up us up well for
the year of racing ahead. A huge shout out must go to my very supportive sponsors, their continued
support is appreciated. I’d like to welcome and thank the new sponsors to the HOLMES Racing program who are 24-7 Diamond Drilling, Pro-Bolt UK, Precision Racing Products, ZIP Racing and Works Connection.”