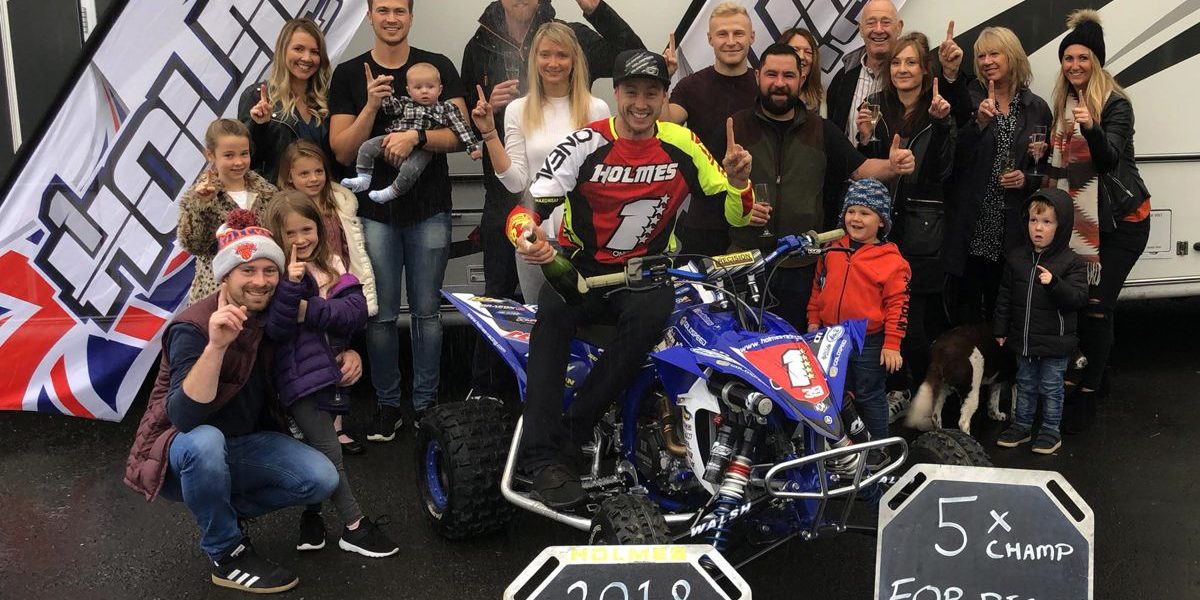 Extremely wet sandy conditions greeted the racers on Sunday morning following a day of heavy rain at the Kent circuit. Reigning champion and current championship leader Paul Holmes, timed his qualification lap to perfection by topping the leader board giving him the all important first gate choice for the three 20 minute + 2 lap races.

Race 1 saw an impressive Holmes lay down a flag to flag victory by grabbing the holeshot from the far inside gate and rode clear to victory.

After a top 4 start in race 2, Holmes worked his way to the front and took another race win.
Grabbing the 3rd and final holeshot of the day, Holmes began to open up a lead before getting stuck on the opening lap in one of the deep soft ruts formed by the Sidecars in the previous race. Forced to dismount to pull his quad out of the ruts, Holmes re-joined the race in last place. He proceeded to put on a spectacle for the crowds by rapidly climbing up to a solid 4th place. This was just enough to clinch the overall result for the days event.

Holmes ended the day 50 points ahead of his closest rival in the Championship and secured his 5th ACU British Quad-X Championship in just 7 years!

Holmes commented at the end of the day’s racing: “After having the flu all week, I was just looking to bag solid points towards the Championship to be honest but with the wet conditions all my focus went on getting a solid start and staying out of trouble and it paid off! My holeshot in race 3 was great and it was looking like a perfect day with 3 wins but I got stuck which definitely wasn’t the plan. I need to say a huge thank you to the team and everyone who supports my program and give a huge shout out to my very supportive sponsors who enable me to do what I do. Claiming the Championship is amazing, I have put in a lot of hard work for this and the results show.
Final round overall result