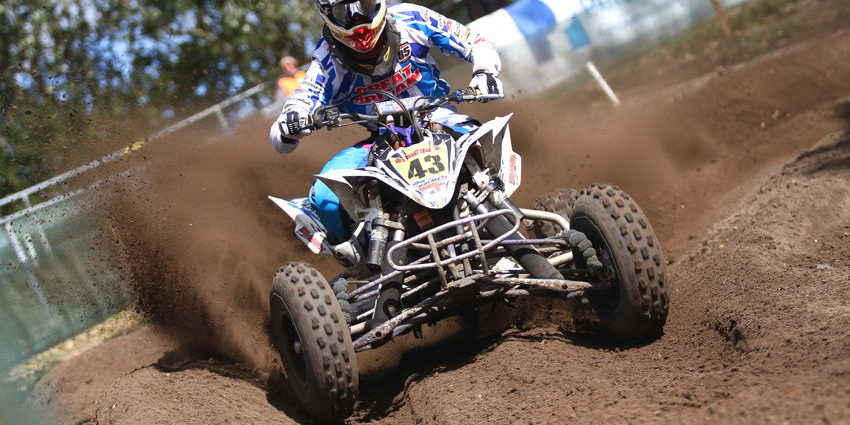 Paul Holmes clinched his first ever ACU British Quad-X Championship at the penultimate round this past weekend at the spectacular Dean Moor Motocross Park in Cumbria. Paul Holmes went 1-1 yet again this weekend for another overall victory making it a perfect season as he takes the 2012 title.

Heavy rain on the Saturday evening made for somewhat tricky conditions in the early stages of Sunday’s racing. But despite this and with the hard work of the dedicated circuit owners, the surface quickly dried out as the day progressed and the spectators enjoyed a superb display of race-craft with some nail-biting battles.

Holmes didn’t get the ideal start to the day as he struggled with traffic in the short timed qualification session and had to settle for 7th gate choice for the two 25 minute + 2 lap races.

Rounding the first corner in 3rd place, Holmes settled into a steady pace as he waited for the race to progress and at the half way point began his charge towards the lead. Catching the leader of the race whilst attempting to ride mistake-free in the tricky conditions, Holmes closed into within 2 seconds of the leader and set the fastest lap of the race with just one lap to go. Holmes only had one more lap to make the move and with just 5 corners to go, he pounced and rode around the outside of the leader taking the race win with a load of confidence.

Grabbing a fantastic holeshot and riding out front, Holmes settled into a comfortable pace which he managed easily until the chequered flag, winning the 2nd race and the Championship.

Holmes commented after the day’s action:“I am ecstatic with how today has turned out and winning the Championship hasn’t sunk in yet. I have been working really hard for this over the past few years and have come close but to have finally wrapped it up one round to go is an absolute honour! It hasn’t been an easy year but the Team and I never gave up, enjoying it as we progressed, making this Championship victory something to really remember. I really do need to once again give a huge thank you to my family, girlfriend, friends and unbelievably supportive sponsors who’ve been on this journey with me. Without them all I wouldn’t be collecting this title, Thanks!”