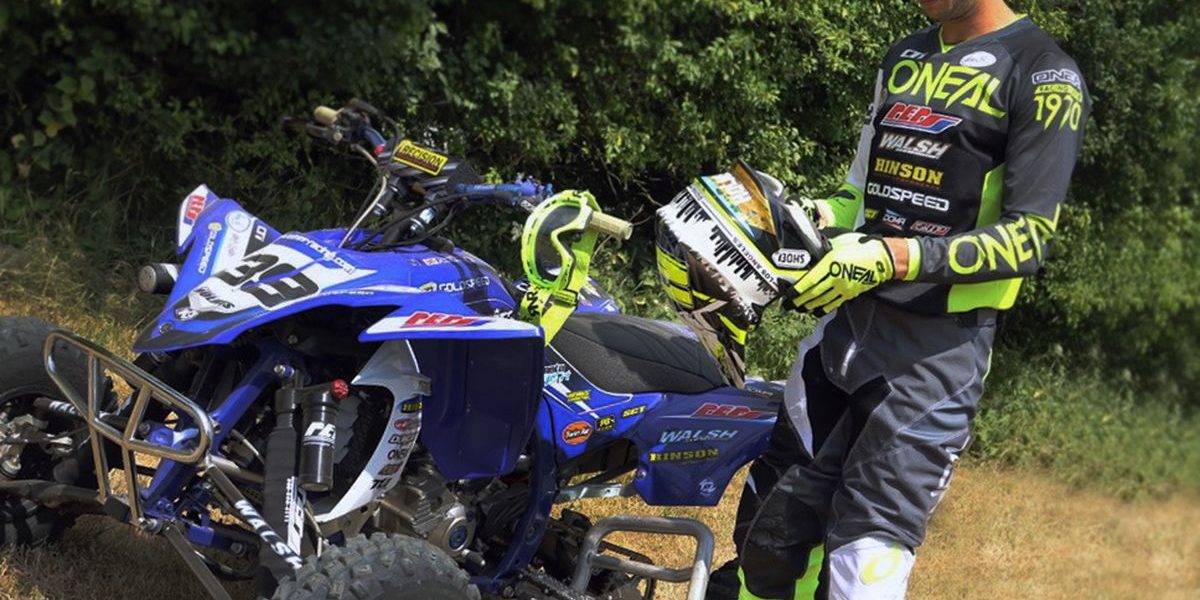 3rd June 2018 – Reigning British Champion apprehensively entered round after his non idyllic build up to round two following the crash at round one. Holmes had hurt his Ribs and was limited in what he could train on and off the track so his usual preparations were reduced. His confidence grew throughout the day and this was demonstrated in the 3rd race of the day showing his speed and determination in wining.

Race 1: Holmes chose an outside gate into a tight left hand first turn which set him up perfectly for the sharp right turn which followed. With a good gate jump, Holmes slid into third after the second turn. With tricky track conditions on the narrow circuit, Holmes opted to settle into his own pace which allowed the leaders to pull away reducing the dust fir himself.  Holmes lost one place at the midpoint of the race but then regained it on the final lap taking a strong third place finish.

Race 2: Another great start witnessed Holmes do the same again gaining places into turn two and finding himself in a top four spot. With deteriorating track conditions Holmes rode his own race again, making his own pace which was consistent throughout the race and managed to make another late race pass into second place narrowly missing out on the win with and exciting last lap battle.

Race 3: Holmes determined to end the day on a high, got another good start and shot into second place in the opening few corners and put pressure on the early race leader.  By the end of lap two Holmes had made the pass and began to gap the field showing his speed and experience, managing the gap until the chequered flag unrivalled taking the win with his championship rival McLernon dropping back in the field to fourth place cementing Holmes with the overall victory.

With the 3-2-1 scorecard, it was enough to give Holmes the overall win and secure his lead on the 2018 championship.

Holmes commented at the end of the day’s racing: “Despite not having a perfect day, I tweaked the set up throughout the day which made it perfect for race 3.  My consistency and self belief came good to secure the race 3 win and I’m happy to take the overall win of the day. I am working really hard and need to say a big thanks to those who make it possible. My family, Girlfriend, friends and amazing supporters and sponsors!!.. Thank you”